Murder and manslaughter charges have been filed against Derek Chauvin, the officer who prosecutors say held his knee on Floyd’s neck for nearly nine minutes.

This story is being updated throughout the Tuesday. Please check back for updates. All times Eastern:

Authorities on Tuesday released surveillance video from an incident which caused the death of David McAtee, a black man shot by officers in Louisville, Kentucky, during protests.

McAtee then appeared to fire a gun outside his restaurant, toward the officers, police said. Officers took cover and returned fire, police said.

From the footage it appears McAtee fired first, police said.

Authorities cautioned Tuesday that the video does not provide all of the answers.

Why officers were approaching McAtee’s restaurant in the first place is under investigation, police said.

The officers have not yet been interviewed, police said.

Louisville Metro Police Chief Steve Conrad has since been fired after it was announced that no body camera footage was available of the shooting, The Louisville Courier Journal reported.

Conrad previously said he would retire at the end of June after facing immense pressure following the March death of Breonna Taylor, a young black woman who was shot dead by police while in her home.

12:15 p.m.: Despite overnight looting, Chicago to move into next phase of reopening

Amid overnight looting, Chicago Mayor Lori Lightfoot promised Tuesday, “we are 110% dedicated to you successfully reopening safely and securely.”

Lightfoot said she was with one business owner who “burst into tears” and “broke down” as she looked at the devastation to her store.

Despite the unrest, Lightfoot said Chicago will move into phase 3 of its coronavirus reopening on Wednesday.

“We want economic activity to resume peacefully and safely in every single neighborhood, especially those hurting the most,” Lightfoot said.

In New York City, despite an 11 p.m. curfew, nearly 700 people were arrested overnight as peaceful protests devolved into moments of vandalism, looting, fire and confrontation.

Luxury brands and big box retail stores in Rockefeller Center and the Upper East Side had windows smashed and spray painted. Many retailers have boarded up their storefronts.

Some officers were hit by cars of protesters fleeing the scenes of vandalism and looting.

“I know we will overcome this,” he said, adding he’s asked community leaders to “step forward” and “take charge.”

New York City will now be under a nine-hour curfew each night this week, beginning at 8 p.m. and ending at 5 a.m.

The mayor on Tuesday asked those who want to protest to do so during the day, and then return home.

He also said he’s very worried that protests are leading to the spread of the coronavirus.

10:40 a.m.: Senate Judiciary to hold hearing on George Floyd’s death, policing in US

Senate Judiciary Committee Chairman Lindsey Graham said he’s planning to hold a hearing on June 16 to examine Floyd’s death and policing in the country, promising to “take a deep dive” into the issue.

“It’s a long-overdue wake-up call to the country that there are too many of these cases where African American men die in police custody under fairly brutal circumstances,” he said. “It’s clear to me that policing among men in the African American community is a topic that needs to be discussed and acted upon, and I expect this committee to do its part.”

“I’d like to get to the root cause of it. Mr. Floyd’s case is outrageous on its face, but I think it speaks to a broader issue,” said Graham, R-S.C. “We just need to get to the bottom of what happened and what we can do to fix it.”

“I don’t know how to make that a reality, but we’ll have a hearing along those lines,” Graham said.

In New York City, despite an 11 p.m. curfew, more than 500 people were arrested overnight as peaceful protests devolved into moments of vandalism, looting, fire and confrontation.

Luxury brands and big box retail stores in Rockefeller Center and the Upper East Side had windows smashed and spray painted. Many retailers have boarded up their storefronts.

Several officers were hit by cars of protesters fleeing the scenes of vandalism and looting.

Minnesota Attorney General Keith Ellison confirmed he is “considering all charges” and that “all options are on the table,” when it comes to prosecuting Derek Chauvin for the death of George Floyd.

Speaking to ABC News’ Good Morning America, Ellison, who has taken over the prosecution in Floyd’s death, warned that the case must be dealt with methodically and that prosecuting Chauvin would not necessarily be easy.

“Generally, jurors resolve all doubts in favor of the police,” said Ellison. “The system is such that there are certain immunities police have, there are certain presumptions. There are relationships that police have that are established over the course of years. And the fact is if you just look at the Freddie Gray case, people looked at that video and were quite certain that there needed to be a conviction. No one was.”

“The fact is these cases are not easy,” said Ellison. “And anybody who says they are has never done one.”

Ellison was reluctant to give a firm deadline on the timeline of the case but confirmed that the public could see charges very soon.

“We are having a fresh review from what the county attorney has already done … and we are looking at this case with fresh eyes,” said Ellison. “There is nobody who has culpability who will not be held accountable.”

Said Ellison: “The public has an expectation that there will be, there will render assistance when necessary, that [police] will not add harm. Just saying ‘I didn’t know’ and ‘I was following orders’, I don’t think is working for the public anymore. That is not a comment about the evidence or the law. It is a comment about where the public’s mind is these days.”

Ellison said that he and his team are moving “expeditiously” but warned that they also have to move carefully which could take more time than the public would like.

“There are numerous videos, numerous witness statements, a lot of stuff to go through for us to do due diligence,” Ellison stated. “We are not going to prolong this any longer than is absolutely necessary to do that due diligence and we are moving expeditiously, yet we have to move carefully. I know that is unsatisfying to people. They want, what they want immediately, and of course people have waited too long and have been too patient over the years but this case must be done methodically and we are doing that right now.”

Las Vegas Sheriff Joe Lombardo held a brief press conference to update the public on the two shooting incidents that took place amid protests happening across the city last night.

In the first incident, an officer was engaging with protesters near the Circus Circus hotel and casino and was shot.

The suspect in that shooting has been taken into custody but Lombardo said the police officer who was shot is in “extremely critical condition and on life support currently.”

The second incident occurred at the courthouse on South Las Vegas Boulevard when officers who were posted at the federal building to protect it from protesters encountered a suspect at approximately 11:22 p.m. armed with multiple weapons and appeared to be wearing body armor.

When authorities approached the individual, the suspect reached for one of those weapons and was subsequently shot by the responding officers.

The suspect later died at the hospital.

“This is a tragic night for our community,” said Lombardo. “With these protests, which are leading to riots, one tragedy is only leading to another … our investigations into both these incidents will be ongoing throughout the morning.”

“What has occurred is utterly, utterly unacceptable and I hope the community sees it that way too,” he concluded.

Peaceful protests over the death of George Floyd devolved Monday night into jarring moments of vandalism, looting, fire and confrontation in New York.

There were more than 200 arrests and widespread vandalism in Midtown Manhattan and along Fordham Road and the Grand Concourse in the Bronx, much of which went down after the citywide 11 p.m. curfew.

Luxury brands and big box retail stores in Rockefeller Center and the Upper East Side had windows smashed and spray painted. Many more retailers boarded up their storefronts, giving the heart of a vibrant city already shuttered for the virus the look of blight.

There were also several reports of officers being hit by vehicles of protesters fleeing the scenes of vandalism and looting.

Two police officers have been shot in separate incidents in Las Vegas as people protest the killing of George Floyd in Minneapolis, authorities said.

The condition of the two officers is currently unknown. Police have said the scene is active and have asked the public to avoid the areas.

Police Chief Hayden said that a peaceful protest began around 3 p.m. with a couple of thousand people in attendance but that sometime later a group of about 200 people started looting.

The group reportedly ignited fireworks and set them off aiming at the officers. Hayden also said the officers, who he said exhibited restraint throughout the entire ordeal, also had gas thrown on them.

That is when, he said, several officers, who were standing on the line, all of a sudden felt pain and realized that they had been fired upon with four of them being hit, according to Hayden.

The Police Chief also confirmed that there are still reports of gunshots being fired in the city that they’re trying to get under control.

The officers were taken to hospital and treated for their wounds. The investigation into who shot them is ongoing.

Los Angeles Police Department Chief Michel Moore apologized for a remark he made during a mayor’s press conference Monday afternoon where he said: “We didn’t have people mourning the death of this man, George Floyd, we had people capitalizing. His death is on their hands as much as it is those officers … We didn’t have protests last night. We had criminal acts.”

The comment was met with immediate backlash and Black Lives Matter LA called for Moore to be fired in a tweet.

Several hours later, Police Chief Moore, amid much criticism, issued an apology on Twitter saying that he misspoke during the press conference.

New York City Mayor Bill de Blasio tweeted late Monday night that any unrest has calmed down at Barclays Center in Brooklyn, the site of clashes between protesters and police over the last few days.

De Blasio said protesters were overwhelmingly peaceful on this latest night of demonstrations, but that some people during the evening caused some damage that won’t be allowed.

In Denver, protesters at the State Capitol took a knee and observed eight minutes and 46 seconds of silence — the same amount of time Derek Chauvin had his knee on George Floyd’s neck before Floyd died. Only the sound of helicopters above and honking in the distance could be heard.

The mayor said the peaceful demonstrations honored the memory of David McAtee, the local restaurant owner who was shot and killed by Louisville police officers early Monday morning.

The city of Washington, D.C., has been relatively quiet tonight compared to the violence of the past weekend, law enforcement and homeland security officials tell ABC News.

Officials report sporadic disturbances in Chinatown, where tear gas was deployed near the Convention Center.

City and federal law enforcement, as well as the military, has had a heavy presence on the city streets, with aircraft, including a Black Hawk helicopter, patrolling overhead. 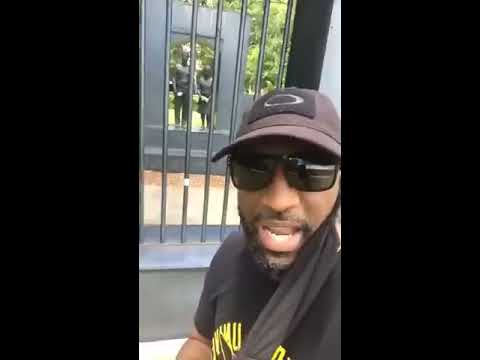