Over 44.9 million people across the globe have been diagnosed with COVID-19, the disease caused by the new respiratory virus, according to data compiled by the Center for Systems Science and Engineering at Johns Hopkins University. The actual numbers are believed to be much higher due to testing shortages, many unreported cases and suspicions that some national governments are hiding or downplaying the scope of their outbreaks. The criteria for diagnosis — through clinical means or a lab test — has also varied from country to country.

The United States is the worst-affected nation, with more than 8.8 million diagnosed cases and at least 228,636 deaths.

Just days after issuing a countywide curfew, a judge in El Paso County, Texas, ordered a two-week shutdown of nonessential businesses — a move that was met with pushback from the state attorney general.

“Since the inception of this pandemic, El Paso County has never seen this level of infections through our community,” Samaniego told reporters at a press briefing Thursday evening. “Our hospitals are at capacity, our medical professionals are overwhelmed and if we don’t respond, we will see unprecedented levels of deaths.”

The judge said that El Paso had seen a 365.2% increase in COVID-19 hospitalizations since the beginning of the month.

Following the announcement, Texas Attorney General Ken Paxton tweeted that Samaniego “has no authority to shut down businesses” and was violating Gov. Greg Abbott’s executive order.

“My office is quickly exploring all legal actions,” Paxton said.

“The Judge did not consult me and refuses to return my call, so I am seeking clarification from the Attorney General on the new County order, which does not supersede the Governor’s orders,” Margo said in a statement.

“We must strike a balance of keeping our neighbors safe while not destroying people’s abilities to feed their families,” he added.

There were 937 hospitalizations due to COVID-19 in El Paso on Thursday, a new record, University Medical Center CEO Jacob Cintron said.

On Sunday, Samaniego ordered a two-week curfew to limit mobility in the community amid rising COVID-19 cases and hospitalizations, and after intensive care units at all area hospitals reached 100% capacity as of Saturday. The curfew has been imposed for 10 p.m. to 5 a.m., and trick-or-treat activities on Halloween are not allowed, Samaniego said.

Clemson quarterback Trevor Lawrence, the likely No. 1 pick in next year’s NFL Draft, has tested positive for COVID-19.

Lawrence’s positive test was confirmed by his coach late Thursday.

“Trevor has authorized us this evening to announce that he has tested positive for COVID-19 and is now in isolation,” Dabo Swinney said in a statement. “He is doing well with mild symptoms but will not be available for this week’s game against Boston College.”

The Tigers are currently the No. 1 team in the nation and are 6-0 on the season. They are a huge favorite over Boston College.

The Clemson star was one of the top lobbyists among college players to hold a college football season. He argued the athletes would be less protected if they did not compete and instead stayed at home for remote learning.

Lawrence has been the projected No. 1 pick in the 2021 NFL Draft ever since he exploded on the scene as a freshman in leading the Tigers to a national championship in 2018. He was also the offensive MVP of that game.

Swinney has admitted it’s unlikely the junior will return for a fourth season. NFL teams are already salivating over the prospect of the 6-foot-6 signal caller joining their rosters.

As the U.S. continues to battle a second surge of coronavirus cases, the country has set a new single-day record for cases, according to The COVID Tracking Project.

Our daily update is published. States reported a record number of cases—88.5k—and 1.3 million tests. 46k people are hospitalized. The death toll was 1049. pic.twitter.com/CRsbyiBRSw

While cases and hospitalizations continue to surge, deaths have been increasing, but at a slower rate. The death toll on Thursday was 1,049, about 250 more than the seven-day average. The death toll’s relative stagnation is likely due to younger people getting sick and better treatment strategies.

The U.S. has set a new record for the number of weekly cases, according to the COVID Tracking Project.

Thirty-nine states had a rise in hospitalizations this week, the largest increases being in Texas and the upper Midwest, the COVID Tracking Project found.

The U.S. is reporting a record 8.2 million tests, but case growth is outpacing test increases. Forty-seven states as well as Washington, D.C., have seen cases rise faster than tests since Oct. 1, according to the COVID Tracking Project.

Hospitalizations are up 16% and the number of patients in ICUs continues to grow, she said.

Seventy out of Wisconsin’s 72 counties are reporting very high COVID-19 activity. Over 214,000 people in Wisconsin have been diagnosed and at least 1,948 people have died.

The U.S. could lose another 15,000 to 28,000 lives to COVID-19 by Nov. 21, according to the weekly ensemble forecast released by the Centers for Disease Control and Prevention.

That would mean a total of 243,000 to 256,000 American lives lost to the coronavirus by the weekend before Thanksgiving.

The state’s seven-day positivity rate has climbed to 18.1%, up from 15% last week, state epidemiologist Angela Dunn said at a news conference.

“Our hospitals are getting too full to function,” Gov. Gary Herbert warned.

Herbert said gatherings will be limited to 10 people.

“I know you have holidays coming up, Halloween and Thanksgiving … it can be done,” Hebert said. “That will help us get past this surge.”

“The virus is raging throughout Ohio. There is no place to hide,” DeWine tweeted.

“Today I’m calling on the leaders of each county, each community, in Ohio to come together to create a COVID Defense Team. This is what we need to fight back. It should include commissioners, mayors, hospital leaders, business leaders, religious leaders, health commissioner, etc.,” DeWine continued. “These teams should assess their county’s situation, inventory assets, and focus on what steps are needed to turn this around.”

A Centers for Disease Control and Prevention (CDC) case study released Thursday found that one ninth grade boy, who tested PCR negative before traveling, likely spread COVID-19 to over 100 people at a boys’ overnight summer school retreat in Wisconsin.

Among the 152 high school aged boys, counselors and staff members, there were 118 confirmed COVID-19 cases and 38 probable cases, the CDC said.

The tightly packed students, in session from July 2 to Aug. 11, didn’t wear masks and shared dorms with beds close together.

The ninth grade boy who likely set off the spread had a negative PCR test less than a week before the retreat, but he developed symptoms the day after arriving, according to the CDC. A family member of the boy tested positive while he was at the retreat.

In order to lower the risk in this type of setting, the CDC said it is critical to implement pre-arrival quarantine and testing, symptom monitoring, early identification and isolation of cases, mask use, distancing and enhanced hygiene and disinfection practices.

Liege, Belgium, is emerging as an epicenter of Europe’s worsening coronavirus crisis.

In Liege, where there’s a roughly 41% infection rate, the local hospital is at full capacity. ICU numbers have tripled in the last three weeks.

A doctor told ABC News that health workers who have tested positive for COVID-19 are still treating patients to keep the hospital system from crashing.

“It is literally twice yesterday,” he said. “We cannot allow that number to keep growing. We really have to double down.”

The mayor said there’s no particular reason for the uptick. The city’s seven-day positivity rate average is 1.92%.

De Blasio repeated his message that “people really should not travel for the holidays unless it’s absolutely necessary.”

“Unfortunately, pretty much everywhere is doing worse at fighting coronavirus,” he said. “And if you go someplace else, the chance of bringing it back with you is high.”

“People want to trick or treat outdoors, small groups with masks on, that’s great. Big gatherings, parties, that’s not great at all,” he said, warning, “we find out about them, we are going to break them up.”

Oct 29, 9:24 am
Hospitalizations in Oklahoma could triple by December: Officials

Officials in Oklahoma are warning that COVID-19 hospitalizations in the Sooner State could triple by the end of December if people don’t change their personal behaviors or if local ordinances are not enacted.

Projections from the Institute for Health Metrics and Evaluation showed that if local mask and social distancing mandates don’t change, cases, hospitalizations and deaths will all increase in Oklahoma.

“We elected leaders to protect us, that’s one of their main responsibilities,” Dr. George Monks, president of the Oklahoma State Medical Association, told ABC News affiliate KTUL-TV in Tulsa. “To protect their citizens, you may upset a minority number of citizens in your district, but you’ve got to step up.”

If mandates are eased, those numbers could go up even more, officials said.

From Oct. 16-22, the number of cases in Oklahoma increased 20.2% and the week-over-week deaths increased 34.5%, according to the Oklahoma Department of Health.

Monks said IHME projects said the state would reach its maximum need of 2,711 beds for COVID patients on Dec. 28. It doesn’t have to be that way, he said, if everyone wore masks.

“It is projected we will reach our maximum number of new COVID-19 cases per day on 12/09/2020 at 5,005 cases/day,” Monks said on Twitter. “This number changes significantly if we implement universal masking.”

Oct 29, 9:21 am
Vaccine effectiveness will be known by December, Fauci says

Researchers should know by December whether the vaccines in development are safe and effective, according to Dr. Anthony Fauci, director of the National Institute of Allergy and Infectious Diseases.

“I can predict, I believe with some degree of certainty, that by the end of November to the beginning of December, we will know — based on the size of the trial and rate of infections that are ongoing in this country — if we will have a safe and effective vaccine,” Fauci said Wednesday in a virtual keynote address at the University of Alabama at Birmingham’s COVID-19 research symposium.

Fauci added that he’s “cautiously optimistic that we will have a safe and effective vaccine even though you can never make absolute predictions.”

Hospitals in El Paso, Texas, are setting up tents to deal with the increase in COVID-19 patients as the U.S. sees a surge of new cases across the country.

All hospitals in the city, according to ABC News affiliate KVIA-TV, have now started to build tents as of Wednesday night.

“Our hospitals continue to implement our surge plans to expand capacity to help manage the influx of Covid-19 patients to meet the rapidly expanding needs of El Paso,” a Hospitals of Providence spokesperson told the station. “Medical tents will help decompress the Emergency Departments.”

Texas Gov. Greg Abbott also announced on Wednesday that the El Paso Convention Center is being converted into a health care facility to expand hospital capacity in the area.

The seven-day rate of positivity in El Paso is 15.57%. There are 908 people currently hospitalized with coronavirus in the city, with 223 patients in ICUs and 111 on ventilators. There are 285 ICU beds in total in El Paso.

With the spike in cases in El Paso, city officials asked residents this week to largely stay at home: “For the next two weeks, we are asking you to please stay home unless for essential activities to reduce the spread of COVID-19 and prevent strain on our hospitals.”

In Texas, there have been more than 911,000 diagnosed cases since the pandemic began, with at least 18,162 deaths.

How to Get a Loan for Flipping Houses 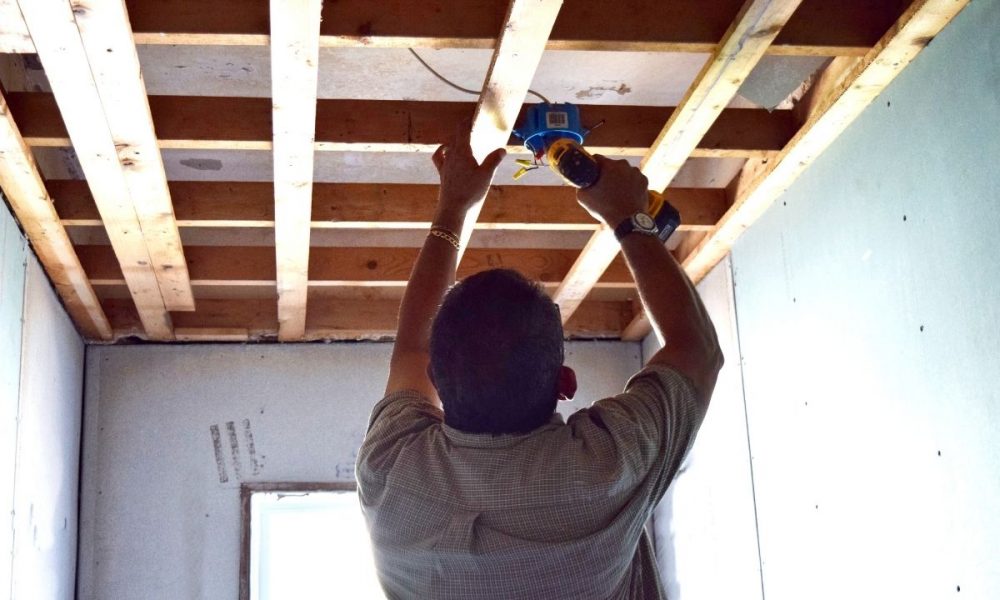