(HOUSTON) — As George Floyd’s loved ones prepared to say their final farewells at his funeral service in Houston on Tuesday, thousands came to the city to pay their own respects, including Wanda Cooper Jones, the mother of Ahmaud Arbery, a black man who was killed while jogging in Georgia.

Cooper Jones told ABC News anchor David Muir, who was also in Houston, that she’d had no idea there were “so many mothers that had actually lost their sons to this type of brutality.”

Her 25-year-old son was shot and killed as he went for a routine run on Feb. 23 through the Satilla Shores, Georgia, neighborhood. Three white men, including a father and son, have been arrested and charged in his murder.

Cooper Jones told Muir that she “needed” to go to Houston to show support for Floyd’s family.

Floyd, a 46-year-old black man, died on May 25 after being restrained by Minneapolis police. All four officers in Floyd’s case were fired from the department and are now facing charges.

Floyd’s death has sparked protests and calls for justice, and an end to racism all over the U.S. and the world.

Cooper Jones told Muir that she’d never thought her own son would fall victim to violence. On Thursday, graphic details of Arbery’s last moments were revealed during a preliminary hearing for the men accused of killing her son, including that he had been hit by a truck and called a racial slur.

“It was shocking. … It was heartbreaking because I often thought about Ahmaud in his last minutes and seconds of his life,” she said. “But Thursday … it gave me some closure, but again, it was very heartbreaking.”

She told Muir that her son would have turned 26 on May 8.

“A couple days prior to his birthday, the video of his murder was leaked so that made it very, very difficult to actually celebrate his birthday and to learn how the last minutes of his life went,” she said. “Birthdays are special to mothers but they’ll never be the same without our children. Never.”

Birthdays are special to mothers but they’ll never be the same without our children. Never.

She said the support that she and others had received as they grieved the loss of their family members was much appreciated.

Cooper Jones is now pushing Georgia to pass a hate crime bill. She told Muir that Arbery would be proud of her activism, her presence in Houston and the journey she’d embarked on to get him justice.

When Muir asked what Cooper Jones would tell mothers across the U.S. wanting to not only reach out to her, but to also help make a difference in the country, she said she was “here to help.”

“I know I don’t have the answers but I can listen. We share the same pain. … If I can be any kind of help, I’m here,” Cooper Jones told him.

She said that the protests and rallies that had arisen after Floyd’s death had offered her some solace in her own son’s slaying.

“I saw that we’re not standing alone, everyone is standing among us. It gives me strength to go on,” she said. “I think and I pray that we will see change.”

How Mitt Romney Stepped Up | RSMS 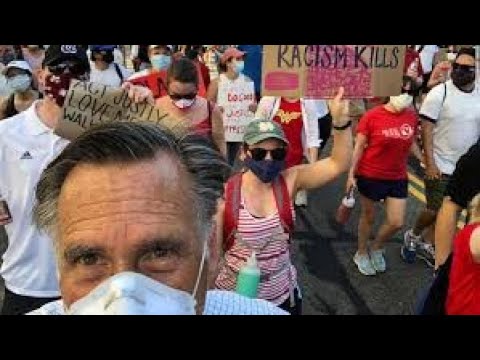